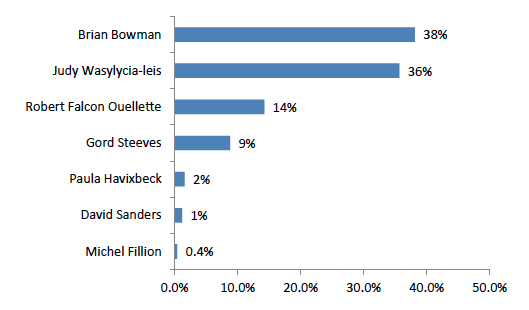 In partnership with 680 CJOB News and Global News, Insightrix recently conducted a public opinion poll with 800 Manitoba residents regarding their views on provincial politics. In the poll, respondents were asked who they would vote for if an election were held today: Greg Selinger (NDP); Brian Pallister (Progressive Conservative Party of Manitoba); Rana Bokhari (Manitoba Liberal Party); or Alain Landry (Green Party of Manitoba). The poll shows that Premier Greg Selinger and Manitoba’s New Democrats are 25 points behind the Opposition Progressive Conservatives.

For more details on the poll and to view an infographic, please visit
http://www.cjob.com/2014/02/07/infographic-exclusive-poll-shows-plunging-support-for-ndp/